The Structure and Hierarchy of the Harem


Acquisition of Slave Girls : Young non-Muslim girls of breathtaking beauty, chosen from the slave market, were sent to the Sultan for his harem, often as gifts from his governors. These girls were usually from the Caucasus region; Georgians, Circassians, and Abkhasians. They were either kidnapped or sold by their parents. Many poor Circassian and Georgian families used to take their own children to the market, and encourage them to enter the life of concubinage, which they hoped, would promise a better future. There were also girls taken by pirates and sold in the slave markets in Istanbul; as well as girls presented as gifts by certain European ruling families. The intention here was to place a spy in the harem and to encourage the Sultan to look favourably on trading or political agreements with that country.

Admission to the Harem : Before being admitted into the harem, these girls were thoroughly examined by trained concubines (cariye) and the chief eunuchs (haremagasi) to make sure the girls had no physical defects or weaknesses. If a girl was found to be eligible, she was presented to the Valide Sultan (Sultan's Mother) for final approval.

Once she was accepted into the Sultan's harem, her name would be changed - often to a Persian one, according to her particular qualities or appearance. For example, Laligül (Ruby Rose) and Nazgül (Shy Rose) or, if a girl had charming rosy cheeks, most probably she would be renamed "Gulbahar" meaning Spring Rose. 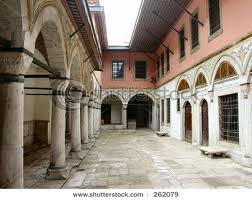 The cariyes' courtyard, where the girls slept.

Training : These acemi (novice) girls were immediately converted to Islam and began an elaborate training in Ottoman culture, the Turkish language, and palace etiquette. After a certain period of basic training, they were called odalisk or odalik and assigned to several duties depending on their talent and beauty, and they would be supervised by trained concubines (kalfa and usta).

The word, odalisque comes from oda (chamber), and odalisque means "chambermaid". Odalisques were at the very bottom of the harem hierarchy and were not yet concubines, however, there was always a possibility that one day they could become one. They never served the Sultan himself, but rather served as chambermaids to concubines, wives, and other important royal members of the harem. Any odalisques with charm, beauty and self-confidence, would be selected to become concubines. They were taught to sing, dance, play musical instruments, recite poetry, embroider and so on.

Some of the most beautiful odalisques showing exceptional abilities, were selected to serve the Sultan in person; in other words, they were promoted to the very important position of gedikli (maids-in-waiting). They were responsible for the Sultan's ultimate comfort and relaxation. Their duties included bathing and dressing him, doing his laundry, and serving his food and drinks. 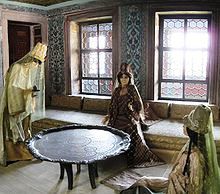 An Odalisk serves coffee to the Valide Sultan

Other odaliks were assigned to particular jobs and placed in the service of the Valide Sultan, the kadins (wives), the Sultan's daughters, high ranking cariyes (concubines), or the chief black and white eunuchs. 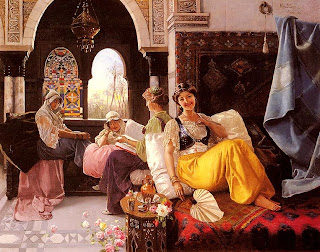 Note: I am indebted to Umit Sonmezler for some of the above information.
Posted by Beth Elliott at 23:31 5 comments:


Life in the Ottoman harem was very different from what was imagined by Europeans.  In Ottoman society, as an institution, harem life reflected the secluded privacy of family life.


The 'cariyes' served the sultan's wife or his mother. Under the guidance of the sultan's mother, they were taught to read and write, play music, and to follow the intricate rules of palace etiquette and protocol. They were trained and educated in the skills and accomplishments considered appropriate for women at the time. After 9 years in service they were allowed to marry.  Very few were honoured even by the privilege of waiting at the sultan's table, and still fewer became royal wives.  Hurrem Sultan  was a good, but rare, example of palace opportunities for cariyes.

Among the cariyes it is commonly believed that there were many in the harem from noble families of . - for example: 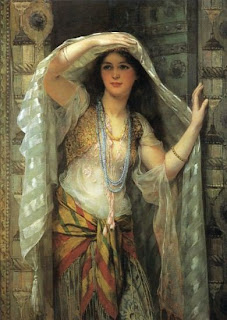 After nine years of service the harem girls or 'cariyes' were given their leaving document. In addition, they received a set of diamond earrings and a ring, a trousseau and some gold as their marriage portion. After the harem, their lives and well-being were closely supervised or else suitable husbands were found for them. Outside harem life, they were renowned for their good breeding and for their discretion, never being known to reveal any intimate details about the royal family to outsiders.
Nevertheless, graffiti on the harem walls shows that not all cariyes were contented with their lot:  'Dilferib whose heart burns / Is wretched / O God / Alas alas.'

Posted by Beth Elliott at 22:58 No comments: