Persuaded at last to give up her Quakerish grey gowns and tightly pinned hairstyle, Nell arrives at the Assembly Hall transformed – and is an instant sensation.
While the young gentlemen are enthusiastic, some of the young ladies are goaded into jealous competition. But one youthful admirer is an unlikely champion, and the happiest of beings on this evening.

Nell was struggling to maintain her composure. It was difficult to appear unaware of the stares people were casting at her and the heads drawing together as people commented. She was never at ease with strangers and felt quite panicky at the sudden crowd of gentlemen requesting a dance. The marquise, delighted by this success, was selecting partners for both girls. At this point the crowd thinned a little and Nell saw Joachim striding towards her, with Bertrand by his side, talking as usual.

Help me, she signalled by a look and his answering smile reassured her that all would be well. She prayed he would ask her for the first dance. That would help her through the ordeal of being inspected and commented on. But oh, no, that horrible Anne suddenly sprang out and grabbed his arm. Will she never give up?

He stopped, he went aside with her. Nell swallowed her disappointment. She jerked her head round not to watch them, and found the marquise beside her.

‘My dear, let me present Monsieur de Lordat.’ She smiled graciously at the young gentleman who was hovering breathlessly in front of her, his eyes fixed on Nell. He was so young his cheeks were still smooth and pink, while his high shirt points prevented him from turning his head more than an inch in either direction. No danger there, in fact, she felt almost motherly.

She placed her hand on the youth’s arm and let him lead her into the line that was forming. Her youthful partner informed her that he was Paul de Lordat, the third brother in the family. He danced well and treated her almost with awe, saying how honoured he felt to dance with her. Nell was touched by his youthful adoration, but slightly embarrassed because he was so very young.

Cravat styles of the Regency Era 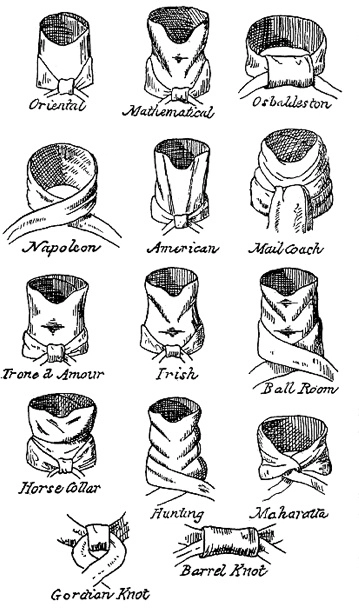