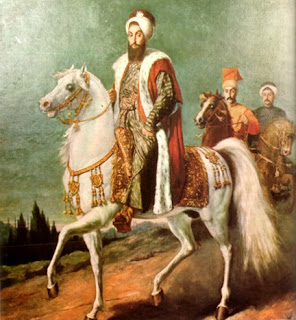 He was a good looking, slender young man, able and energetic, an accomplished musician and a poet. He corresponded with King Louis XVI of France, who faced similar difficulties to those that Selim would now discover.
The previous sultan, Abdulhamid I, had complained of sleepless nights. Selim soon grasped why. His empire was beset by war, disobedient soldiers, economic decline, a restless populace and thrusting minorities, aggressive neighbours, religious fundamentalism, frequent fires in Constantinople as well as outbreaks of plague.

Selim set about initiating reforms of the taxation system and especially of the army. It was obvious that without radical modernisation, the Ottoman army would never hold back the constant attempts at invasion by the Russian and Austrian forces. In spite of much opposition from conservative elements, Selim managed to set his reforms in motion. By 1807 he had established the Nizam-i-Cedid, the New Military Order; 27 thousand troops trained in modern European drill and tactics. These troops were stationed outside the city to avoid inflaming the hatred of reactionary elements in Ottoman society, and in particular, the janissaries, who resisted anything that might harm their privileged status.

Selim gave many parties in the gardens of his palaces. In April 1797 he gave a tulip fete. This is the last known mention of such an event, which had been so popular at the Ottoman court throughout the 18th century. He was an active man and took part in jirit matches, together with his young nephew, the future Sultan Mahmud II. They made up teams from the palace gardeners and the pageboys. Mahmud led the bamya team and Selim the cabbage team.

At the Sultan's invitation, foreign advisers from many European countries flooded into Constantinople.  Selim's court was the centre for introducing European culture into Turkish society. France, Turkey's oldest ally, was particularly favoured. The Sultan gained a reputation for favouring western civilisation.  In addition, he was attracted to the artistic pleasures of rebuilding and decorating his many palaces. [We can see some of these through the paintings of Antoine-Ignace Melling, who became decorator to the Sultan and to his sister, Hatice Sultan.]

Struggling under a heavy burden of taxation, the people protested, sometimes violently. Selim lacked the ruthlessness necessary to resist the growing pressure.
In May 1807, a revolt broke out in a fort at the top of the Bosphorus. The unrest grew until the Sultan was forced to abdicate in favour of his weak-minded cousin, Mustafa IV.
Over the following year matters grew steadily worse. The Russians were occupying Wallachia and Moldavia, which meant food was scarce in Constantinople.  A loyal Governor attempted to restore Selim to the throne but in the struggle, reactionary soldiers murdered Selim on 28th July 1808.

Today he is remembered for his music and poetry as well as for his efforts at reform. Some of his music is still played on Turkish radio. His favourite summer palace on the shores of the Golden Horn, is now the State Music Museum. 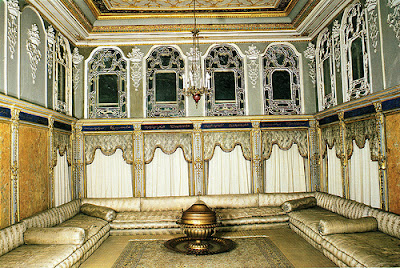 The attempt to end the long running war with Russia is the background
to  Scandalous Lady, also set in Constantinople in 1811.
Scandalous Lady