A little stone house on a hillside surrounded by fields of neatly combed vines, stretching down into the valley and across the plain to the Canal du Midi. A few ribbons of trees, marking the roads; here and there the rooftop of a farm in the midst of its vineyards. So rural, so peaceful, such a splendid change after years slogging in a grey city in rainwashed northern England. 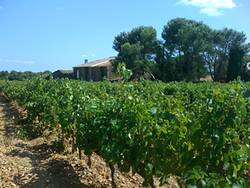 But even rural retreats under a sparkling blue sky have their dark secrets, along with their traditional way of life. An outsider, especially a pretty woman, will have to contend with difficulties of many kinds.

The plot came to me easily enough. I know the area well, love the climate, the people, the pace of life. My characters rushed to join the story. Haha, I thought, so for this tale, my plot flows. [That doesn't happen to me often.]

But five chapters in, the characters take over. They won't give way, so it's back to pantsing. My villain has become a victim. My pleasure-loving young dude has joined the really bad gang. And a third guy has suddenly appeared [univited by me] and started hanging round my MC. OK, I know, it is the south of France, and he's full of charm but my original two fellows were already creating enough action.

Banging my head on the desk isn't sorting things out. My only consolation for now is my new villain. He's so 'orrible it's fun to write him. So, onwards and upwards, imagining I'm there in the summer sunshine, on a terrace with a glass of muscat as the sky darkens into a canopy of velvet and the evening air is a caress.