The kindness of strangers.

A little tale as it's the only thank you I can offer to kind strangers.

Researching a major setting for my novel, which takes place in Istanbul, I needed to visit a royal pavilion, which has the grand name of 'The Pavilion of Mirrored Poplars'.
It contains a number of splendid mirrors, a gift from the Republic of Venice to the
Ottoman Sultan in 1718.
This charming place was the favourite retreat of Sultan Selim III, who was a poet and musician. He came here to compose his musical work.
In his honour, the building is now the State Music Museum. 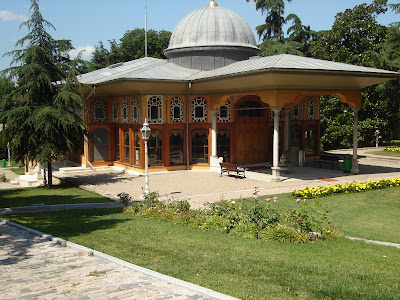 It is situated on the north bank of the Golden Horn, some way out of the main city. I arrived by taxi, but when it came to returning to the city centre, the guide at the museum advised walking up the hill to the bus stop.
As I was obviously a foreigner, the people at the bus stop were curious as to what I was doing in that part of town. [Not museum goers, I think.] The only other woman, wearing a headscarf, began the enquiries. I explained. Everyone nodded politely.
The bus arrived. I got on, but the driver did not accept cash. Istanbul transport is all by special prepaid token. He gestured me to get off. The woman called out to ask if anyone would pay my fare.
A man at the back of the crowded bus offered his token. It was passed forward by willing hands. The driver frowningly accepted it and allowed me on.
We passed the token back down the bus to its owner. I asked the woman how much the fare was, - 2 Liras and 60 kurus, [about 60 pence]. I didn't have change, so gladly passed 3 Lira coins back to the man, with grateful thanks for his help.
A few minutes later, someone tapped me on the shoulder, and handed me 40 kurus. I was humbled by this honesty and goodwill, when I was the cause of such disruption on their journey.
And to add even more kindness, the headscarf woman stayed on the bus until we reached my stop, to be sure I wouldn't get lost.
Every time I go to Istanbul, I find warmth, welcome and kind concern
for my welfare.
No wonder I love the city and its people so much.
NOTE
For more details on the Pavilion of the Mirrored Poplars [Aynalikavak Kasri] see
https://regencytales.blogspot.com/2011/07/hidden-gem.html
For a brief account of the life of Sultan Selim III, see
https://regencytales.blogspot.com/2013/01/difficult-times-reign-of-sultan-selim.html
And the novel....?
Scandalous Lady

In 1811, ice cool diplomat Selim Effendi is negotiating a peace between the Ottoman Sultan and Russia. Then he encounters fiery, rebellious artist Olivia Hartford,
and after that, nothing goes to plan – for either of them.
Posted by Beth Elliott at 19:26