Kitty Towers is lively and kind-hearted.

She is 19 years old, she has glorious brown eyes and glossy chestnut curls. She is also the eldest of five sisters and  two brothers. So, willing or not, her mother insists she must now go to London for the Season and make a good marriage, one that will enable her sisters to mix in society in their turn.

Kitty is most unwilling. Secretly she determines to endure London for two months and then return home to do what she considers worthwhile - helping her father, the vicar, to run his hospital and care for wounded soldiers and the poor and sick.

This picture shows Kitty at a truly dark moment in her adventure.

When she arrives in London, Kitty considers the Season a waste of her time. But soon she finds that under the veneer of social visits, balls and walks in Hyde Park, many social activities mask plots and danger. Even a visit to the theatre can have sinister undercurrents.

While her friends flutter from one entertainment to another, Kitty realises that a dangerous spy is intent on betraying vital secrets, and she bravely attempts to prevent this treachery, even when it seems it will cost her her heart – and possibly her life.

Posted by Beth Elliott at 23:29 No comments:

I enjoy creating Regency era villains. They can be handsome and fashionable and their vices and bad habits are often so similar to the faults displayed by the hero that it causes confusion and discussion. That was an essential part of my plot in The Wild Card. I like having my first opinion of a character reversed when an event or action shows how a totally different interpretation can be put on their earlier actions. But sometimes this leads to a big disappointment as the charm and seductive manner reveal a heartless villain - or, even worse, one with a weak character. Consider Willoughby in 'Sense and Sensibility' - handsome, well liked, full of charm and so adaptable that he is universally pleasing... He merely lacks wealth and we can pity him for the restrictions that puts on him..... until we see how he overcomes that.

The supposed villain may have an excellent reputation in society and be much admired for their style - or perhaps being rakish or wilful makes the person more attractive. Think of Lady Barbara Childe in Georgette Heyer's 'Infamous Army'. Of course, she only appears to be a villainess. Her wild spirit and wilfulness stand her in good stead as eventually she must cope with a handicapped husband.
I'd rather cope with Willoughby than face a sinister rogue like Carver Doone. He is from a previous age, a swashbuckling, ruthless villain without one redeeming feature. Perhaps Georgette Heyer drew on him a little for one or two of her characters; the unpleasant Duke of Andover in 'The Black Moth', for instance. 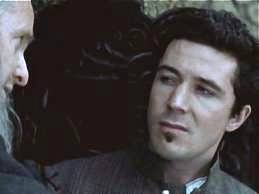 The villain who attracts me most is Jane Austen's Henry Crawford. Jane Austen captured so exquisitely the potential of the person to turn either way. Each time I read 'Mansfield Park' I so want him to reform that I hope this time he will..., then am always desolated that he wastes his many good qualities through weakness in his character which mean he always opts for self indulgence. Stricken by this waste, I'm then left to hope that perhaps one day I'll be clever enough to write a villain who comes somewhere close to him. 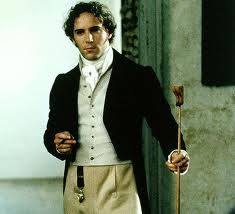 Ah, well, we still have the heroes.